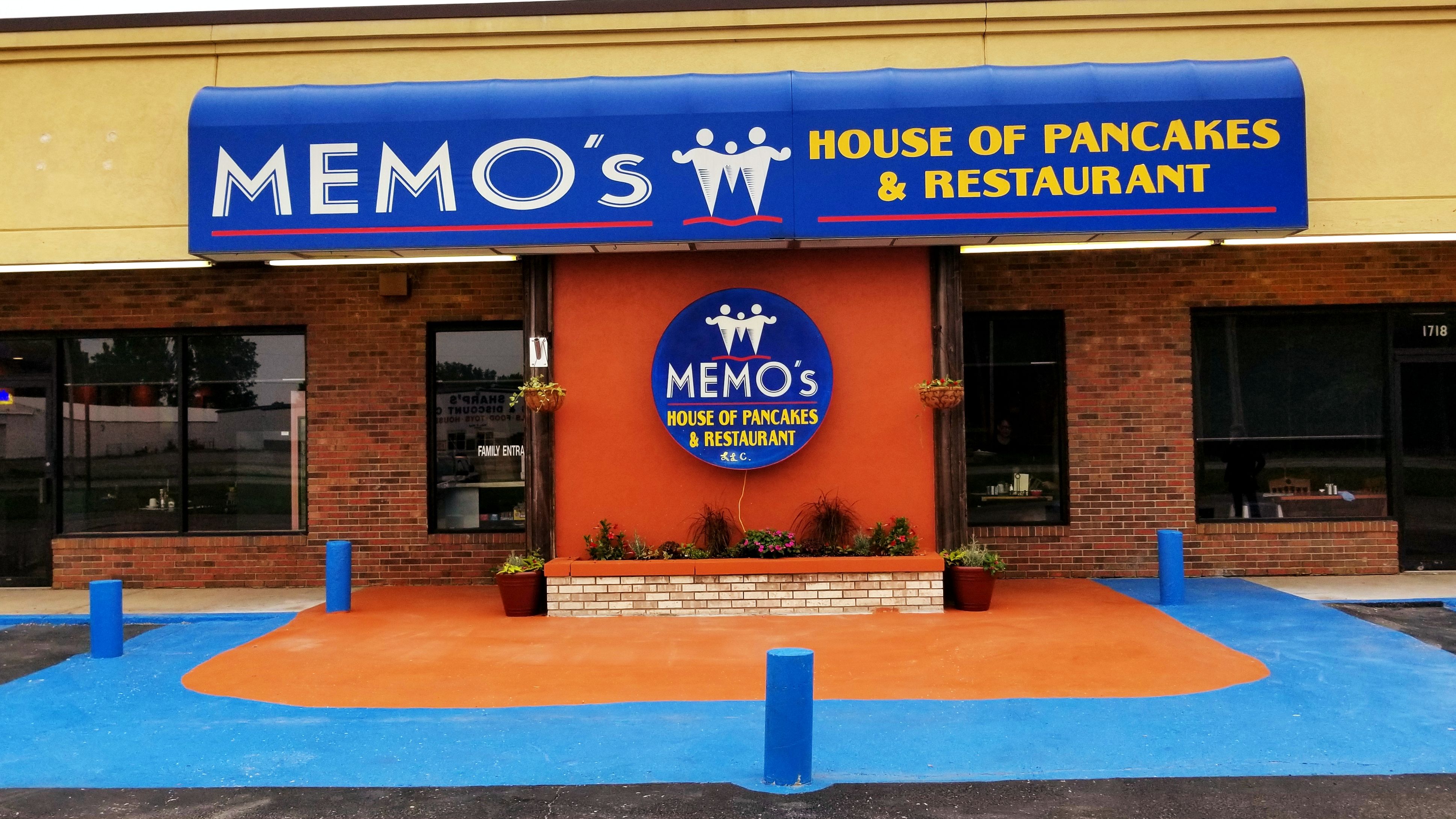 Your choice of any half sandwich with fresh fruit and cup of soup.

With your choice of one fruit: strawberry, banana, peach, cherry or cinnamon apple

These delightful cakes will put a smile on your face! Studded with chocolate chips and dusted with powdered sugar

It's Love at first bite with these light, fluffy and delicious pancakes with fresh berries

Spiced with ginger, cinnamon, nutmeg and cloves for a beautiful breakfast treat

We fill up the plate with three crisp potato pancakes, two large eggs* and three strips of bacon or two sausage links

Crisp and crunchy, served with applesauce and sour cream

A good-for-you mix of spinach, broccoli, mushrooms and feta cheese

For the kid in all of us!

With your choice of one fruit: strawberry, banana, blueberry, peach, cherry or cinnamon apple

Start your morning with a glass of liquid sunshine!

Start your morning with a glass of liquid sunshine!

Stuffed with cream cheese and topped with strawberries and blueberries

French toast hot off the griddle topped with any one of your favorite fruits. Choose one: strawberry, banana, blueberry, peach, cherry or cinnamon apple

Delicate French crepes carefully made to order and filled with strawberries

Dressed up with syrup and butter

Two scrambled eggs* with tomatoes, onions and your choice of jalapenos or bell peppers

Golden French toast teamed up with two eggs* and choice of bacon, sausage or ham off the bone

A good-for-you mix of spinach, broccoli, mushrooms and feta cheese

A colorful omelette of tomatoes, green peppers, onions and cheese. Smothered with salsa and a dollop of sour cream

A classic of diced ham, onion, green peppers and cheese

This one has it all! Diced ham, chopped bacon and sausage completed with melted Monterey Jack cheese. Delicious!

Spice up your taste buds with this zesty skillet of chorizo sausage, jalapenos, onions and plenty of cheddar cheese

We load this one up with all the garden goodies... tomatoes, mushrooms, green peppers, onions, spinach and broccoli. Finished with Monterey Jack cheese

Breakfast as you want it to be! Start your day with a flavorful 10-ounce ribeye* sizzled up to your order and plated with two large eggs*. Includes choice of toast or pancakes

A classic breakfast of a toasted English muffin split and topped with Canadian bacon and two poached eggs*, ladled with hollandaise sauce. Hashbrowns alongside

Benedict with a Southern flare! Sausage patties atop a warm split biscuit, topped with two poached eggs* and smothered with rich sausage gravy. Served with hashbrowns

Half a sandwich served with cottage cheese, Jell-O and fresh fruit

Our beefy burger topped with crisp bacon and your choice of American, Swiss or cheddar cheese

With crispy chicken strips instead of beef! SautÃ©ed mushrooms and Swiss cheese

Our half pound burger loaded with bacon, jalapeÃ±os, pepper Jack cheese, lettuce, tomato, avocado and a touch of mayo

Tender grilled chicken breast served on a bun with lettuce, tomato and mayo

With our fresh made chicken or tuna salad

Tender chicken stir-fried with vegetables and served with rice, no potato choice offered

Our spiced up soup with chipotle and guajillo peppers, made with catfish, crab legs, shrimp, octopus, clam, mussels and scallops

Our housemade pork sliced into chunks with refried beans and rice. Served with your choice of corn or flour tortillas

One enchilada, one quesadilla and one soft taco, rice and beans. Your choice of chicken or beef. Sorry, no mixed - must be all chicken or all beef

A hearty Mexican stew made from corn and flavored with pork

Your choice of four beef, chicken or carne asada* steak tacos served with a cup of today's soup

Two buttermilk pancakes, one egg* and two pieces of bacon or one sausage link

Two Pancakes and One Egg*

Served with hashbrowns and toast

One egg*, two strips of bacon or one sausage link, hashbrowns and toast

Two triangle slices of French toast, one egg* and two strips of bacon or one sausage link

A half-order of biscuits and gravy. Served with one egg* cooked to your liking

Our delicious hamburger steak* served with one egg*, hashbrowns and toast

Served with hashbrowns and toast

One egg*, hashbrowns or homestyle potatoes, bacon or sausage link

With bacon or sausage link

With bacon or sausage link


How Can We Help You